Capoeira presents a unique combination of fight, acrobatics and dance. It is an art with distinctive philosophy. The duel of two opponents can be defined as a pretended struggle - a game based at improvisation. It is very important to keep the game and all movements flow, which in combination with music and singing zpěvem makes Capoeira a martial art atractive not only for those who take part but also for spectators.

History of Capoeira is full of unclearness and unanswered questions untill today. It begings right with answering a question: Where does Capoeira really come from? Although nobody contests a statement, that it has evolved up to its today`s form in Brazil, many experts claim Afrika to be its birthplace and that for more reasons. The fact is, that since the first disembarkation of Europeans in 1500 there were 3.5 million africans violently abducted to Brasil. More words used in Capoeira are derived from african tribes languages and some rituals, for example ngolo of Mucope tribe is possibly considered as a forerunner of this brasilian martial art. Another, although indirect proof is a group of martial arts, very similar to Capoeira, placed to different parts of " the New world". On Martinique there exists I´aqya, on Cuba Maní, both include acrobatics and pretended fight in the rhytm of music. On Trinidad there is known a fight dance called Kalinda, incerdibly similar to brasilian Makulele.

The first mention about Capoeira as a fight is dated to year 1770. In 1809 there was a royal police founded, which pursued capoeiristas in Brasil and if there weren`t a few regions where it could survive it would be only a mention today. In a period of 1809 – 1889 there were fierce fights between police and capoeristas. After a Republic declaration in 1889 bad reputation of capoeiristas led Government to give a law forbiding practice of Capoeira, that led to even more furious recources from the police.

In 1927 Mestre Bimba founded the first formal academy of Capoeira as a martial art. Although he recieved the oficial licence in 1937. Mestre Bimba evolved a teaching system and approach to the game itself, which was very different from the traditional norms. This style was called REGIONAL. Bimba`s example was quickly followed by Mestre Pastinha, who on the contrary to this inovative tendency, tried to preserve traditional approach to teaching and practice of Capoeira. This style was called ANGOLA. Driven by a vision of a new modern sport, Bimba`s students started to open acedemies all over the Brasil in the 50`s - Rio de Janeiro and then Sao Paulo became centres of this new movement. In 1972 Capoeira was officially announced as a Brasilian national sport and then started the era of local and national tournaments organization. In the mid 70`s Capoeira academies were spread out all over the Brasil and firts Mestres started to give classes in the USA and Europe. The division between the styles REGIONAL and ANGOLA was the most remarkalbe between the 40`s and 70`s of the 20th century. Nowadays there has a new trend developed, which tries to unify both styles with a motto: „ Capoeira é uma só“ ( There is only one Capoeira ). It unites the Angola approach with its traditions and openness of the Regional style to new trends. In the past every capoeirista had two or three nicknames. The Police knew all capoeiristas only with their nicknames, which made them much more difficult to arrest. This tradition continues untill today and a person that become a capoeirsta gets his nickname for his whole life.

The physical game is only a part of what means Capoeira. Music and lyrics are two inseparable parts and without these the game would become only empty kicking in the air. Players gain energy for their performance from the people who take part of the Roda. The basic instrument is Berimbau, a string instrument that reminds a bow. Berimbau controls the rhytm of games that every capoeirista should follow. Usually there are used three Berimbaus - Gunga, Media, Viola. Gunga is the leading instrument and the others are to complement it. Everything comes from Gunga. Other percussion instruments are Pandeiro, Atabaque, Agogo and Reco-reco. The lyrics in Capoeira have different subject. Usually they describe activities in the roda, life of capoeirstas and their experience. In the past many of the songs were improvised, but this tendency slowly disappears. Another type of a song is Ladainha, which is sung at the beginning of the Roda and usually is a space to honour the old mestres and traditions. The songs in the Roda have two meanings. At first it enlivens up the game and gives Capoeira more cultural form and at second it keeps the traditions alive. In the past and also at the present the knowledge within Capoeira is gained orally and songs are one of the ways of Mestres to pass their knowledge and experience forward. 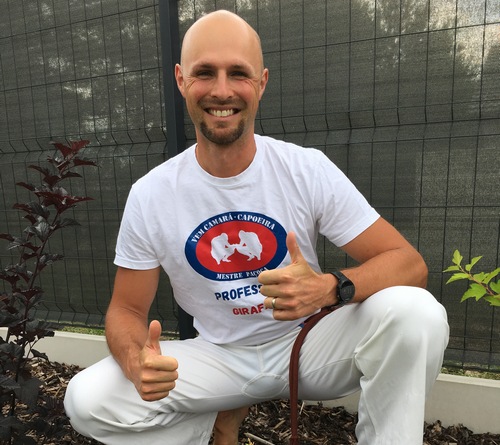